Meet the Future Lawyer, Who Keeps Excelling Against All Odds 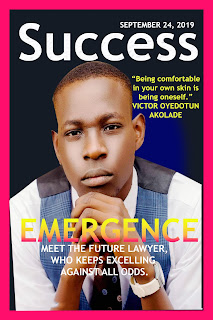 VICTOR OYEDOTUN AKOLADE
Success Magazine: How was your growing up like? Kindly tell us about yourself and your background.
Akolade: My name is Victor Oyedotun Akolade, a legal Practioner, in the making, and a son to Mr. Kolade Oyedotun and Mrs Ruth Abimbola. I am a child of the Most High God, born on the 22nd of June in the late nineties. I love to do a number of things; I love to have time for the most important things, so I love to eat, try out new food recipes, read stories of people who have made it despite the odds, learn and I love travelling. I also love listening to people and help where I can. I love to laugh and dance, and a new love I have found is the basketball game. I have nothing to say as per my relationship life at least not yet, I just stay glued to CNN for updates, and finally I just don’t want to stop loving God. I say so because there’s nothing that makes sense outside Him. There’s nothing anyone sees in me today and admires, that happened until I gave my life to…
1 comment
Read more 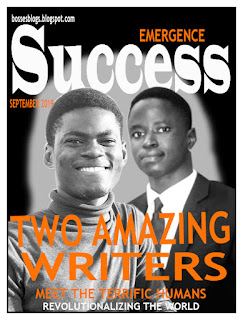 
Success Magazine: How was your growing up like?Kindly tell us about yourself and your background.

Odunfa: Hello, I’m Emmanuel Odunfa, the second in a family of six. I grew up in what I like to call a balanced setting; I got the pampering whenever I needed it and the iron fist was never afar off . While growing up, my parents made sure certain virtues like being kind to others, believing in myself and standing by the truth were at my core and whether I liked the process or not, I’m enjoying the results today. I think by now the whole world knows I'm a foodie by choice, but for the sake of those that don’t, I’ll add it here, yes I love food and I'm unapologetic about it.

Success Magazine: You are privileged to be educated. While growing up, how did you react when you do not see children like you in school?

Odunfa: Asides feeling sad because there’s virtually nothing I could do for them (though I wish there was), I use that as a reminder to why I have to make …
Post a Comment
Read more 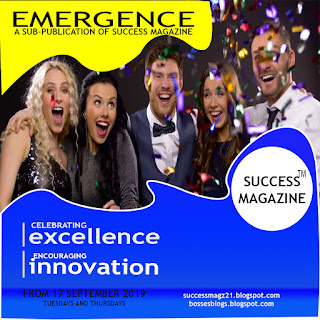 Soccer or Football obsession has proven beyond reasonable doubt to be more of a curse than a blessing. And like a plague it has spread all over the world, leaving an indelible mark on those afflicted by it.

According to worldatlas.com, Association football, or soccer, is the most popular sport in the world. It is estimated that more than half of the world's population consider themselves to be association football (soccer) fans. The sport enjoys an estimated 4.0 billion persons following, and a global sphere of influence.

With numerous viewers comes fans, with fans comes lovers and with lovers come fanatics. Honestly, I absolutely have nothing against lovers of soccer. I am one too.

During my university days, I had loads of friends who love the sport. In fact, it was so rampant that when we occasionally come across guys that have little or no interest in soccer, we almost immediately tag them as weird.


But I must warn, Once the thin line of infallibility is crossed, ordinary use …
Post a Comment
Read more 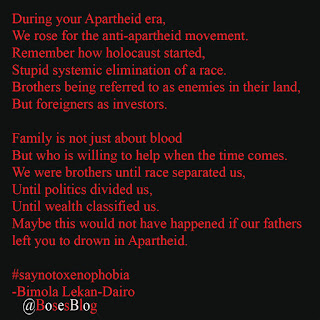 "If he’s drunk, be submissive.", local wife is confused on what to do. BY ENIOLA OREKOYA

September 02, 2019
Culture and Civilization: Marriage
Culture can be defined simply as a people’s way of life. It is the ideas, customs and social behavior of a particular people or society.
Civilization is any complex society defined by urban development, social stratification imposed by a cultural elite symbolic system of communication and a perceived separation from and domination over the natural environment, as defined by Wikipedia.
Most times more often than not, we find that the two concepts end up clashing with one another as one element of one concept might highly negate or contradict the other. The purpose of this article is to list some contradictions and therefore explain why those contradictions don’t even need to occur, because I’m of the opinion that culture and civilization should not contradict each other but yet they should compliment each other.
Some time ago, A lady tweeted on twitter saying “I will never kneel for my husband on my wedding day” some found it offensive whilst some…
Post a Comment
Read more